Chiropractic therapy is an alternative healthcare approach that focuses on disorders of the musculoskeletal system. Practitioners typically forgo medical treatment for hands-on manipulation of the problem area, most notably the spine. By mechanically adjusting the spinal column through various techniques, chiropractic therapists can effectively reduce or eliminate pain from many parts of the body (especially the spine).

Chiropractic therapy is generally referred to as a “holistic” approach to medicine; it will treat not only the symptoms presented but also the body as a whole. Although spinal adjustment is the most common treatment used, chiropractors may use a variety of techniques to treat the joints and muscle tissues of the body, such as:

The medicinal use of spinal manipulation can be traced back over 3000 years to ancient Chinese writings. Hippocrates, the “father of medicine” used manipulative techniques, as did the ancient Egyptians and many other cultures. A modern re-emphasis on manipulative therapy occurred in the late 19th century in North America with the emergence of osteopathic medicine and chiropractic medicine.

SMT gained mainstream recognition during the 1980s. Spinal manipulation/adjustment describes techniques where the hands are used to manipulate, massage, mobilize, adjust, stimulate, apply traction to, or otherwise influence the spine and related tissues. It is the most common and primary intervention used in chiropractic care; In North America, chiropractors perform over 90% of all manipulative treatments with the balance provided by osteopathic medicine, physical therapy and naturopathic medicine.

Majority in U.S. say chiropractic works for neck, back pain.

According to a new Gallup report commissioned by Palmer College of Chiropractic, 33.6 million U.S. adults (14 percent) seek chiropractic care each year. More than half of all U.S. adults have visited a chiropractor, and more than one quarter of them would choose chiropractic care first for back or neck pain. Want to learn more?

Chiropractic is an overall way of looking at the human body. It’s based on the idea that the body is self-sustaining and self-healing. The body is in essence completely controlled by the brain through its connection via the spinal cord and the vast networks of nerves that make up the body. When this system is not functioning at its peak, the overall performance of the human body is lacking.

In the chiropractic world, drugs and medicine are not utilized as a form of treating a patient. While supplementation and nutrition are almost always a part of the bigger picture, drugs and prescriptions can be viewed as band-aids to treat symptoms rather than going to the source and treating the real problem.

While it’s often perceived that the chiropractor is solely here to treat back and neck pain, this is simply a small piece of what the profession really is capable of handling. Chiropractors not only treat soft and hard tissue problems such as sciatica and joint pain, but are largely called on to deal with more significant issues. Some of these issues include fibromyalgia, allergies, insomnia, headaches and many more.

One way to measure safety is to look at the malpractice fees for a practitioner. Those for chiropractors are extremely small (a few thousand dollars annually). Another, of course, is to review the literature. The literature is clear in review after review, that the adverse reactions are minor and resolve within a day or two. The more serious risks have been overstated by a number of zealous medical practitioners who, with the best of intentions, have called attention to a stroke issue following manipulation. The reality, as revealed in two recent publications in Spine is that what appeared to be a causal relationship due to the timing of seeing a chiropractor and subsequent stroke was, in fact, due to being in the wrong place at the wrong time.

A study by Cassidy, et al. revealed that patients who were in dissection developed severe neck or headache pain. These patients then sought attention from not only chiropractors but medical doctors. As a result, the “risk” of stroke was equal or even greater for patients seeing an MD prior to their documented stroke. This, of course, was not due to what the MD did to the patient but because the patient was already in the process of having a dissection; the same for chiropractors. The doctor visit is not a “risk” but an association in time 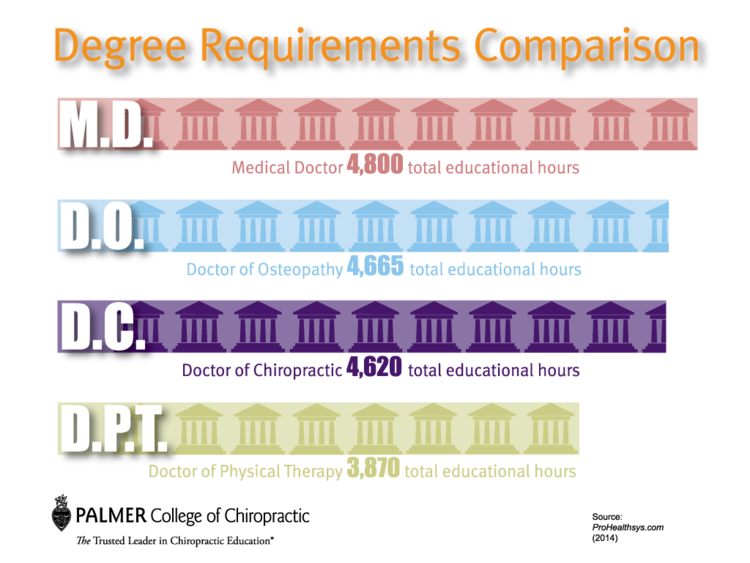 The Council on Chiropractic Education (CCE), a division of the U.S. Department of Education, requires at least 3 years of college prior to acceptance, with certain required hours in science, into any CCE approved college of Chiropractic. Prior to entry into chiropractic college, about 80% of students had a four-year college degrees.

Although much of the education is very similar, there are some significant differences between doctors of chiropractic and doctors of medicine. Chiropractors focus on the body’s natural ability to get well and stay well. Medical doctors are very aware of this inherent capacity, but their approach to patient complaints generally involves reliance on medication or surgery. Chiropractors, on the other hand, do not use drugs or surgery in their approach to patients. Instead, they focus on the assessing the patient’s spine and lifestyle including diet, exercise, sleep, stress-relieving activities, etc. as the sources of healing.

The main approach to treatment for a doctor of chiropractic is assessment and manipulation of the spine and extremities. In the event that the patient’s problem appears to be beyond the body’s ability to heal itself, chiropractors refer to various medical specialists.